Rabies in Dogs: What You Should Know 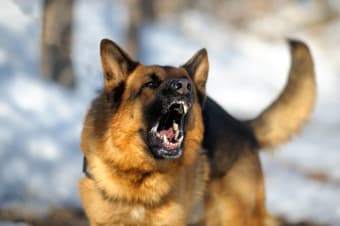 Rabies is a very dangerous viral disease that is likely fatal if contracted by dogs. Our Avon vets explain what the rabies disease is, how to spot it, and how you can prevent your dog from catching it.

What is Rabies in Dogs?

Rabies is a viral disease that is fatal to just about all dogs who catch it. Thankfully, pet parents can help to prevent their dogs from becoming infected with this deadly virus with a canine rabies vaccine.

The rabies virus attacks the central nervous system, spreading through the nerves until it reaches the the brain. Infected animals experience paralysis that eventually reaches the respiratory system, causing death.

Rabies can affect any mammal, including humans. Animals that host and spread viruses like rabies are known as reservoirs for the disease. Host animals include skunks, weasels, and bats.

How Can a Dog Catch Rabies?

The most common way for a dog to become infected with rabies is through a bite from an infected animal. The transfer of the disease is transmitted through the saliva and into the open wound.

In more rare circumstances, the saliva or nerve tissue of an infected animal can contaminate a dog’s open wound or the mucous membranes of the nose, eyes, or mouth. In this instance, a dog could become infected without being bitten.

What are Signs a Dog Has Rabies?

Symptoms of rabies may initially be hard to detect as they tend to appear gradually. Early signs may include a fever, loss of appetite, and a decrease in energy.

After two to four days or so, symptoms tend to move at a more rapid pace. The following symptoms may include:

Changes in behavior will likely be drastic, but can range from severe depression, to extreme aggression.

Classical rabies has two forms, furious and paralytic. A dog may show signs of either, or both if they are infected. If the furious phase develops, dogs can become aggressive and occasionally delusional. They may seem to hallucinate and attack their surroundings with no trigger.

The paralytic phase involves dogs developing paralysis of various muscular systems. They often lose the ability to swallow, which leads to hypersalivation and foaming of the mouth, which most people consider to be a classic sign of the rabies virus infection.

How is Rabies Diagnosed?

There is no definite way to diagnose rabies in a living animal. It is essential to observe your dog for any signs of the disease and accurately interpret symptoms. If a vet suspects rabies based a the dog’s symptoms, a diagnosis can be made by testing the brain tissue only after the dog has died.

What are the Treatment Options?

Rabies is almost certainly fatal in dogs, and there is no hope of recovery or management of the disease. Once a dog has been infected and has started to display symptoms, it is already too late. For this reason, it is critical to keep your dog up to date on their rabies vaccine to ensure their health and safety if they ever were to become exposed to this disease.

Since there is no cure or treatment options, a vet will recommend humane euthanasia if they are strongly confident a dog has been infected with rabies.

Contact Animal General today to schedule an appointment with our experienced Avon vets to vaccinate your dog against rabies.

We are always happy to see patients at our animal hospital! Get in touch today to get started.